A podcast about politics, race, and culture

The Futuro Media Group presents a new political podcast where journalists tell you what you’re missing from the mainstream news.

Co-hosted by award-winning journalists Maria Hinojosa and Julio Ricardo Varela, IN THE THICK has the conversations about race, identity and politics few people are discussing or want to discuss. 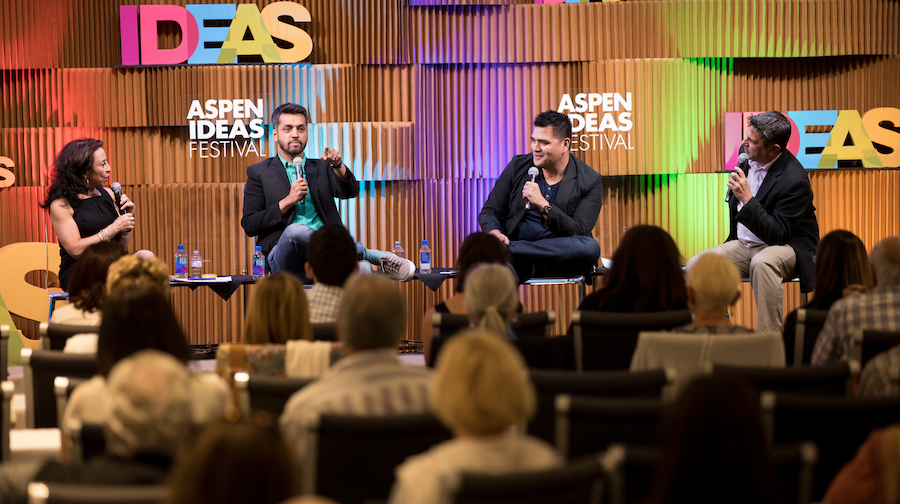 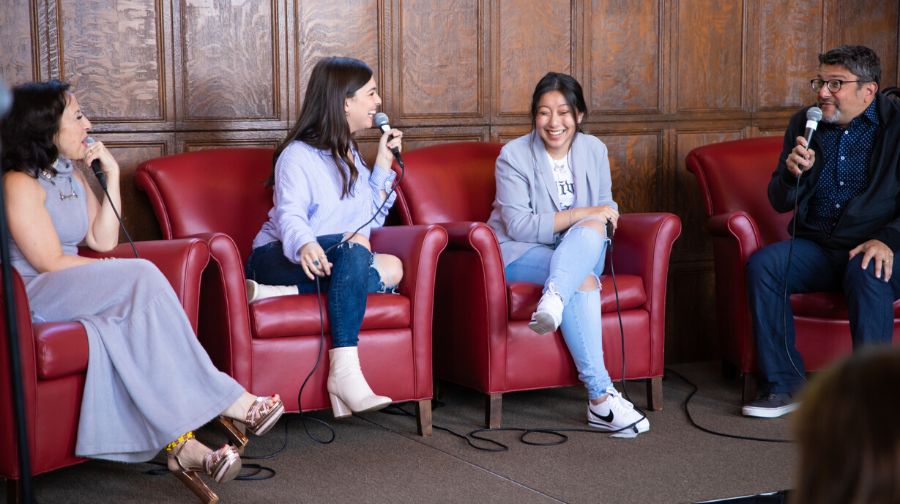 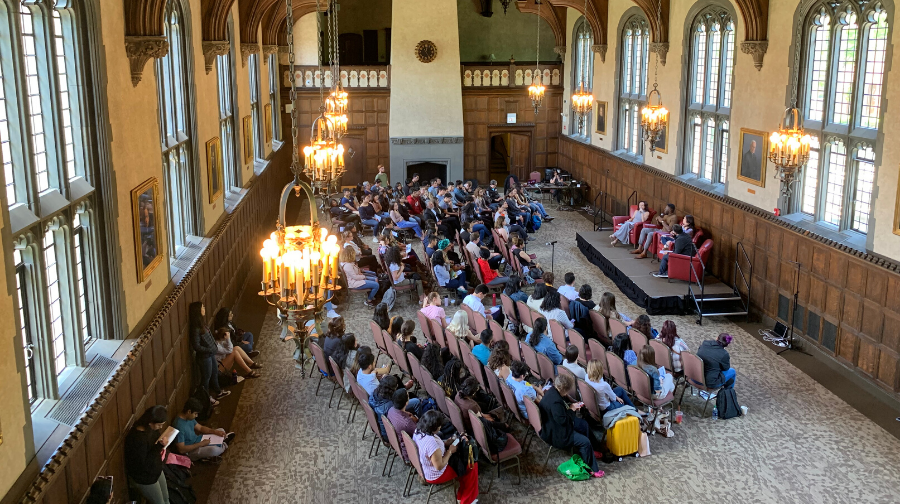 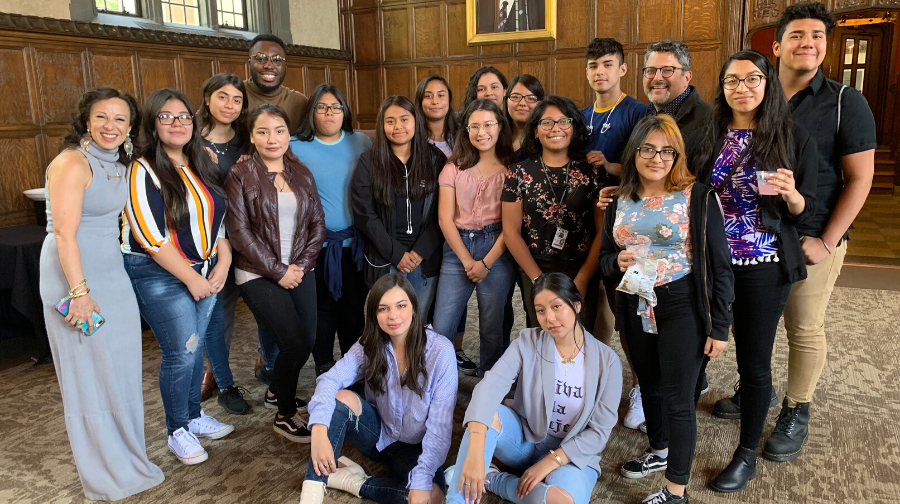 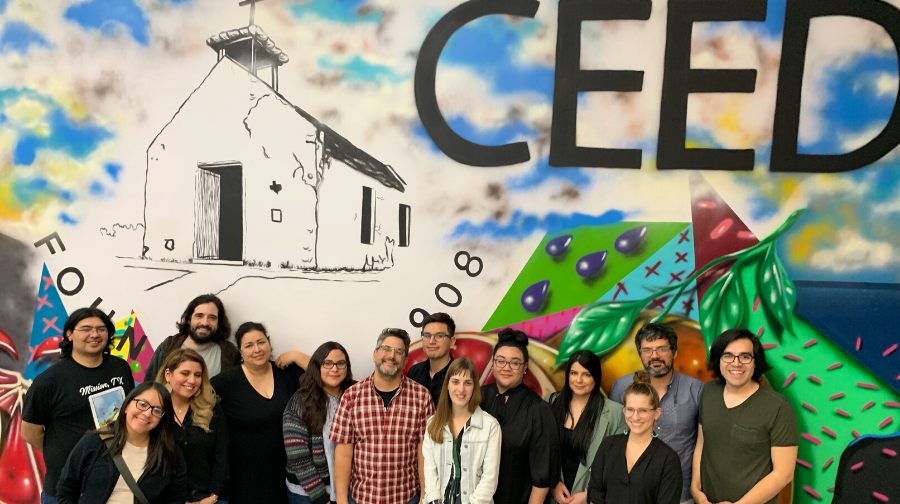 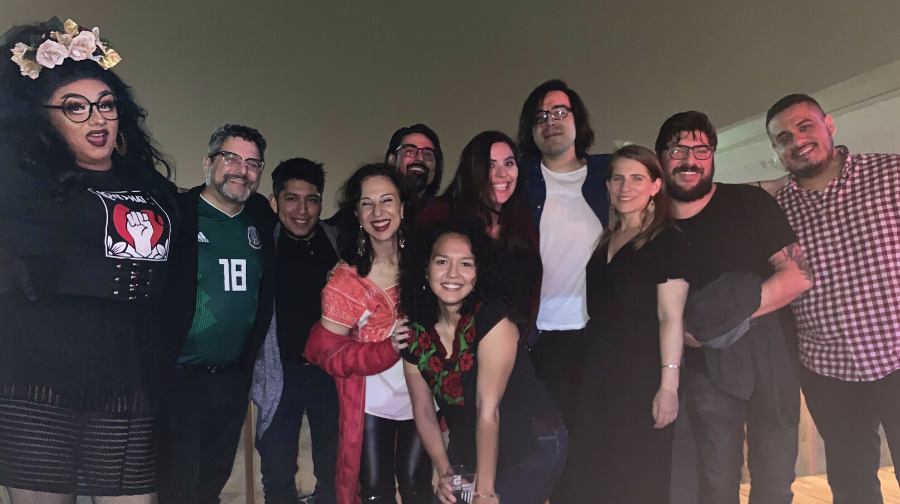 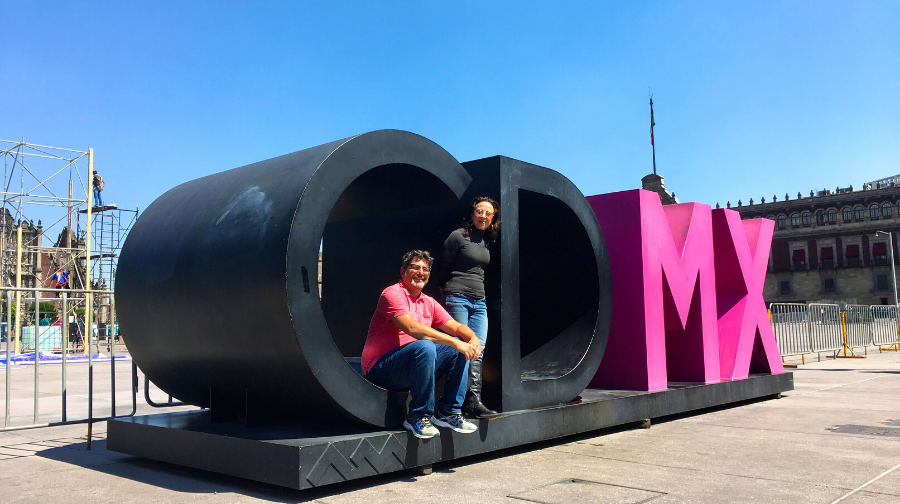 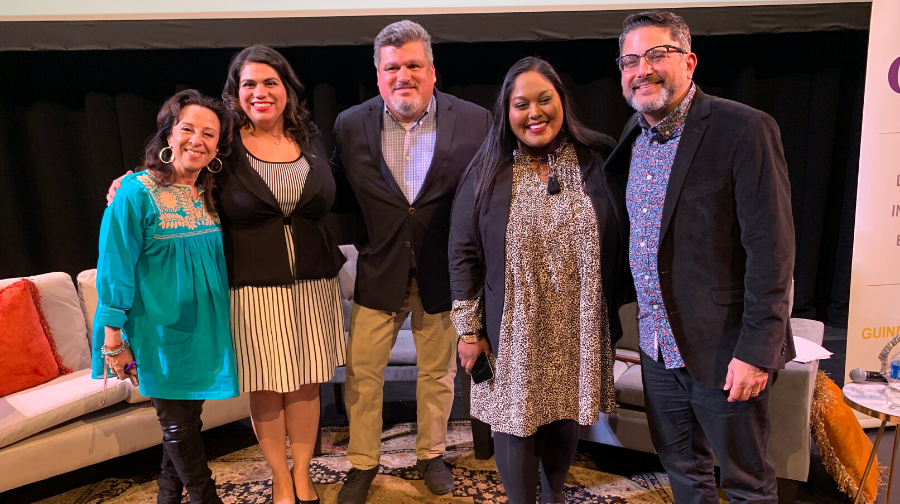 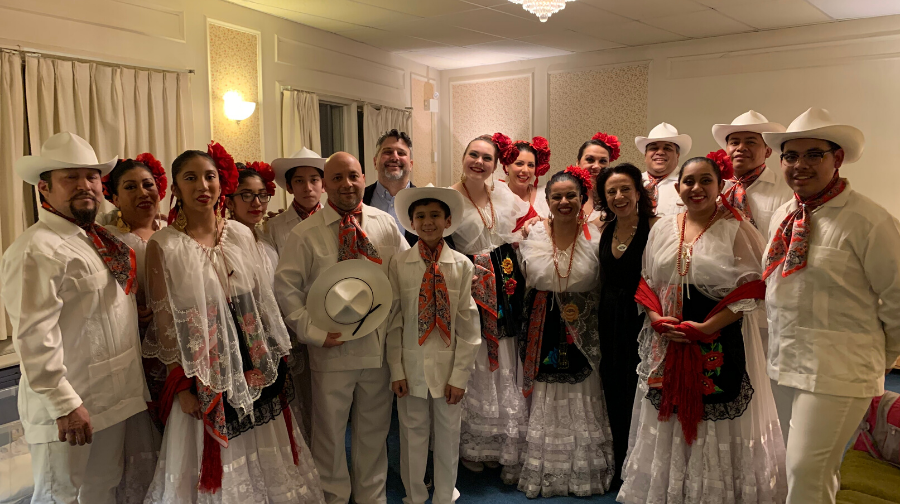 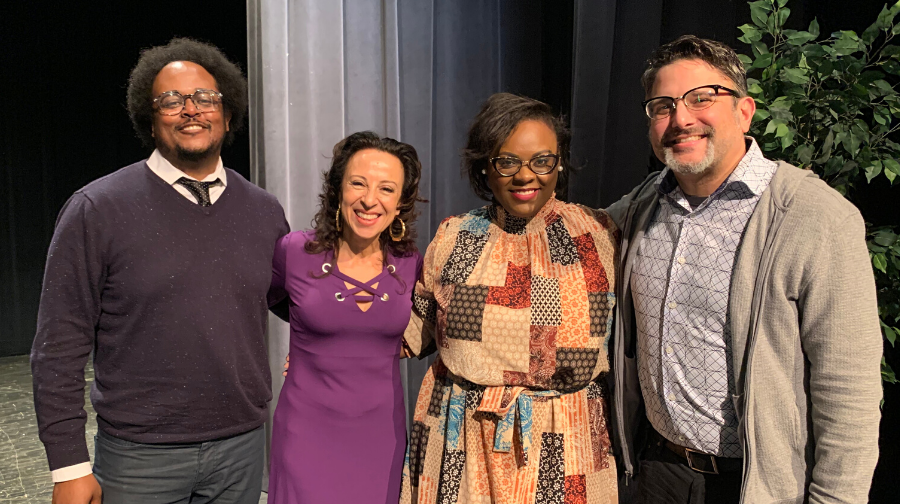 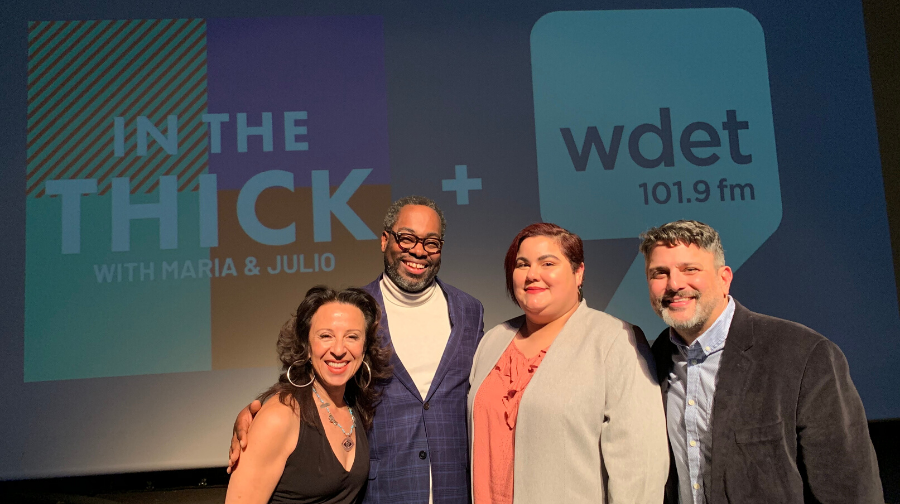 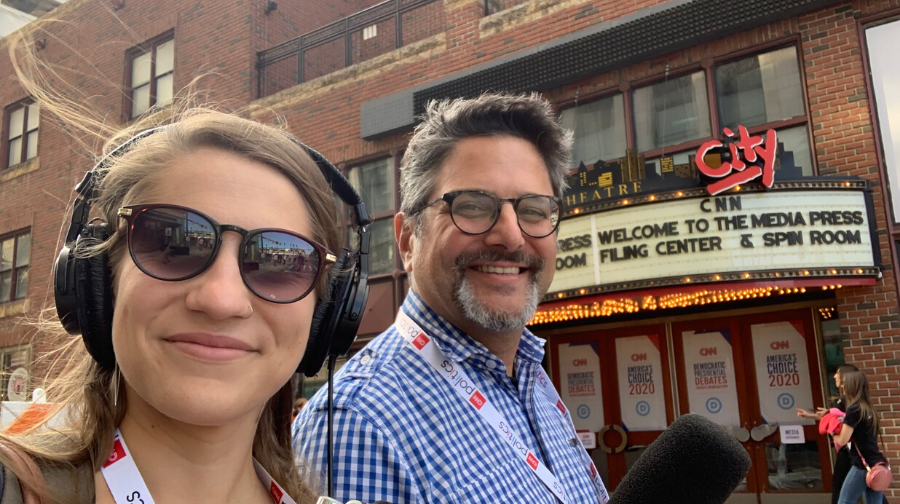 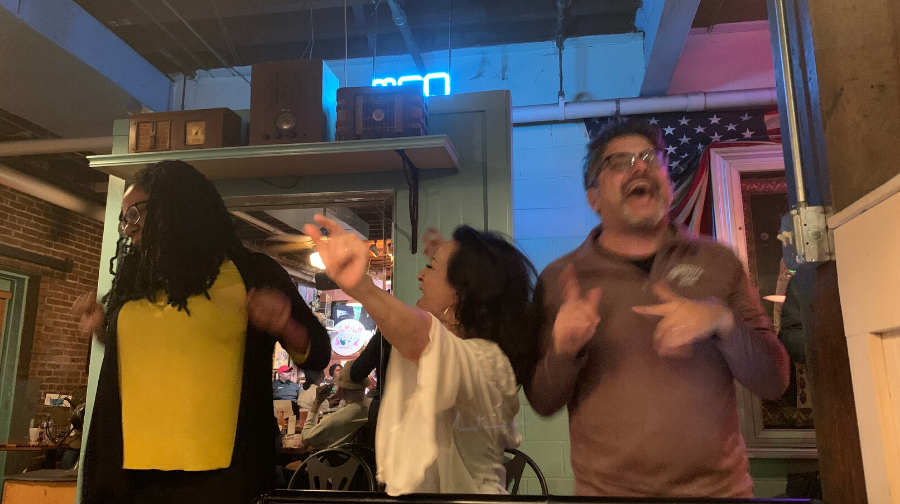 As a reporter who was the first Latina in many newsrooms, Pulitzer Prize winner Maria Hinojosa dreamt of a space where she could create independent, multimedia journalism that explores and gives a critical voice to the diverse American experience. To that end, in 2010, she created Futuro Media, an independent, nonprofit organization based in Harlem, NYC with the mission to create multimedia content for and about the new American mainstream in the service of empowering people to navigate the complexities of an increasingly diverse and connected world.

As the Anchor and Executive Producer of the Peabody Award-winning show Latino USA, distributed by NPR, as well as Co-Host of In The Thick, the Futuro Media’s new political podcast, Hinojosa has informed millions about the changing cultural and political landscape in America and abroad. Hinojosa is also Anchor and Executive Producer of the PBS show America By The Numbers, the first national television series to examine our country’s dramatic demographic shifts, and Humanizing America, a digital video series that deconstructs stereotypes about the American electorate. She is also a new contributor to the long-running, award-winning news program CBS Sunday Morning and a frequent guest on MSNBC.

Hinojosa’s nearly 30-year career as an award-winning journalist includes reporting for PBS, CBS, WNBC, CNN, NPR, and anchoring the Emmy Award winning talk show Maria Hinojosa: One-on-One. She is the author of two books and has won dozens of awards, including: four Emmys, the John Chancellor Award, the Studs Terkel Community Media Award, two Robert F. Kennedy Awards, the Edward R. Murrow Award, and the Ruben Salazar Lifetime Achievement Award. Hinojosa was the first Latina to anchor a PBS FRONTLINE report: “Lost in Detention” which aired in October 2011 and explored abuse at immigrant detention facilities, garnering attention from Capitol Hill as well as both the mainstream and Spanish-language media.

Hinojosa has reported hundreds of important stories—from the restrictive immigration policies in Fremont, Nebraska, to the effects of the oil boom on Native people in North Dakota, to stories of poverty in Alabama. As a reporter for NPR, Hinojosa was among the first to report on youth violence in urban communities on a national scale. During her eight years as CNN’s urban affairs correspondent, Hinojosa often took viewers into communities rarely shown on television. Now at Futuro Media, Hinojosa continues to bring attention to experiences and points of view that are often overlooked or underreported in mainstream media, all while mentoring the next generation of diverse journalists to delve into authentic and nuanced stories that impact their communities. She is currently the Sor Juana Inés de la Cruz Chair of Latin American and Latino Studies at DePaul University in Chicago and lives with her husband, son, and daughter in Harlem, New York.

As President for Futuro Media, Julio (Julito) Ricardo Varela is responsible for the business side of the organization and plays a key leadership role in overseeing the company’s editorial vision, alongside Maria Hinojosa.

Previously, he was the company’s Editorial Director, leading the teams at Latino USA, In The Thick, Latino Rebels and the Community Podcast Lab. As Vice President of New Business Development for Futuro Studios, he headed up the division’s new business initiatives, which have received industry accolades and have positioned Futuro for continued, sustainable success.

In 2011, Julio founded Latino Rebels, one of the top U.S. Latino digital media sites in the world. In 2018, LR officially joined the Futuro Media family. He has hosted Latino Rebels Radio since 2014 and continues to do so. He also co-hosts In The Thick with Maria Hinojosa. He is a frequent contributor to Latino USA, and as Digital Director for Futuro from 2015–2020, Julio expanded the show’s digital footprint, overseeing historic gains in online and social audiences.

Currently, he is also an MSNBC Opinion Columnist.

Before joining Futuro, Julio was Digital Producer for Al Jazeera America’s “The Stream” and his work has been featured in many global outlets, including The New York Times, The Washington Post, The Atlantic, The Guardian, ESPN, NBC News, Quartz, Le Monde, WGBH, WNYC, Face the Nation, Fusion, Univision and Telemundo. He has made numerous national TV appearances throughout his career.

Fernanda Santos has focused her career on elevating the stories of underrepresented and misrepresented communities. As editorial director of Futuro Media, she leads a talented newsroom that produces Latino USA, In the Thick and Latino Rebels, giving voice and space to the new American majority.

She is a professor of practice at Arizona State University’s Walter Cronkite School of Journalism and Mass Communication, a contributing columnist for The Washington Post and a writing coach in the Poynter Institute’s Power of Diverse Voices, a program focused on elevating the voices of journalists of color. She is also a co-writer of ¡Americano!, a musical based on the life of an Arizona Dreamer that ran Off Broadway in the spring of 2022.

Fernanda got her start in journalism in Rio de Janeiro, Brazil, her home country, and has reported in three languages, in Latin America and the United States. She is a lifetime member of the National Association of Hispanic Journalists and vice president of The Sauce Foundation, which honors her late husband’s memory by raising money for journalism scholarships and pancreatic cancer research. Her first book, “The Fire Line,” about 19 firefighters killed in one of the deadliest wildfires in U.S., won a first-place award from the Western Writers of America in the nonfiction category. She is currently at work on a memoir.

Stephanie Lebow is the Director of Engineering/Sound Designer across Futuro Media’s properties and the voice of Futuro’s funders.

She is a Peabody award-winning audio engineer for her work on Afropop Worldwide. She found her passion for radio at Indie 103.1 FM in LA, as an engineer, producer, and on-air personality.

She has mixed and produced music in a multitude of genres from jazz to pop, and received an independent music award for her work. She has also mixed and done sound sweetening for indie films and documentary series such as America By The Numbers and Miss Sharon Jones!

She graduated from Emerson College with a major in Audio Production and a minor in Broadcast Journalism. When she’s not using ProTools to build radio shows, she uses it as an instrument in her own electronic/indie project Stef Lebaux.

Nour Saudi is a journalist focused on interactive and audio reporting. She has worked on data projects with ProPublica and The Hate Index and is the project coordinator for a new initiative from The Craig Newmark School of Journalism at CUNY to teach community journalists how to report on AI. Before becoming Lead Producer at In The Thick, she was their New York Women’s Foundation fellow, reporting on women and girls of color in New York City. She is an alumna from the CUNY Graduate School of Journalism.

Julia Caruso got her start in radio as a broadcast engineer for CBS Radio. Prior to working at Futuro Media, she was the Studio Manager for the Music Technology program at New York University overseeing the recording studios and mentoring students. She is an active member of the Audio Engineering Society and has been on the convention committee for their annual international convention in NYC for several years. She holds a bachelor’s degree in Music Technology and a master’s degree in Food Studies, both from NYU. Learning about culture through food and music is a passion of hers.

Luis Luna joins Futuro Media Group after working in the Theatrical Department at film distributor GKIDS. He has also worked on the programming teams at various film festivals, including Hamptons International Film Festival, Brooklyn Film Festival, and others. He received a dual B.A. in Film Studies and English from Hunter College. Born and raised in Jackson Heights, his favorite things include queer cinema, world travel, dancing to Rihanna, and a good cemita.

Harsha Nahata is a Producer at In The Thick. Previously, she was our New York Women’s Foundation IGNITE! Fellow. Harsha received a master’s degree from the Newmark School of Journalism where she focused on audio and cross-cultural reporting. Harsha is interested in storytelling as a way to understand identity and is drawn to audio reporting because it reminds her of how her ancestors passed down their oral histories.

While in Michigan, she made a documentary about second-generation Asian Americans and conversations that go unsaid in immigrant families. Her work has been featured in Feeling My Flo, a podcast about menstruation, StoryCorps, The Juggernaut, Brown Girl Magazine, and the Bklyner, among others. She graduated with a B.A. in public policy from the University of Michigan.

Gabriela Baez is an associate audio engineer at Futuro Media. A Brooklyn native, she is passionate about representing her community and sharing stories of those who are not represented in the mainstream media.

Prior to joining Futuro Media, she worked as an editor for The Protectors of The Wood podcast series and taught music and music technology to students in New York City. She earned her bachelor’s in Music at Hunter College and a Master’s of Fine Arts in Sonic Arts from the Feirstein Graduate School of Cinema at Brooklyn College.

When she is not mixing podcasts, she is playing bass and creating music with her band Archer Violet.